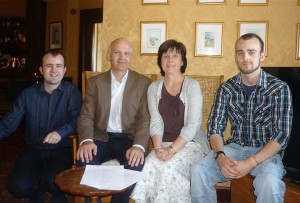 David Scott was born in Glasgow, and brought up (raised) in Edinburgh. He graduated B ARCH (hons) at Edinburgh College of Art/ Heriot-Wall University, Edinburgh in 1982, and registered as a chartered architect in 1984. He is an associate member of the Royal Incorporation of Architects in Scotland. On completion of his academic courses he worked for four years with WN Thomson & Co Architects Edinburgh, and since 1987 has been employed by Orkney Islands Council (www.orkney.gov.uk), a local government organisation in the Orkney Isles of northern Scotland. He is engaged in the design and maintenance of a wide range of public buildings throughout the isles. David, his wife Jacqueline and their two boys Erlend and Samuel make their home in Kirkwall, Orkney. Email: david.scott@orkney.gov.uk

I began working with computers in my student days in the 70’s with Apple IIs and Commodore Pets. Back then, computer drafting was something out in futureland. I later worked for a private architects firm in Edinburgh in the 80’s when AutoCAD started to be used by some of the larger firms. My boss though was a dyed-in-the-wool traditionalist, and we still used T-squares! Mine had 1939 stamped on it and was so worn; long lines had a downward curve to them!

Later, after marrying Jacqueline, a native Orcadian, I got a job as an architect with Orkney Islands Council. Life here is brilliant. Lots of archaeology, history, Scapa Flow, the northern lights, etc etc, and I get to fly around the islands in the local LoganAir 8-seater Islander aircraft, including the world’s shortest scheduled flight: Westray to Papa Westray (2 minutes). (see www.visitorkney.com for more info on Orkney)

Anyway, by 1989 after much badgering, the then department director agreed that we could go ahead and research how best to get started on the CAD ladder. We had a local college run a course in AutoCAD 9 and were looking at various packages. At the same time, a teacher from Kirkwall Grammar School, hearing we were looking at drawing packages said to me “Have you considered Apple Macs?” I had never even seen a Mac before, so he offered to lend us one for a week or so, “to play around with”. He gave us an SE30 with MacDraw installed. The thing was joy to use, but such a small screen, and limited tools, MacDraw seemed to me to be an educational tool rather than a serious CAD package. Then that same week, a PC company rep. was in the office installing word processors. I was having a chat about the best PC’s for CAD when he saw the SE30. “AH! A Mac” he said, “now that’s what you want for graphics work!” (Can you believe it? A PC guy excited about Macs)

He sent me some brochures on the latest colour Mac II’s and a ClarisCAD training video. From then on it was Macs for us, and we bought a two-person system including 2 MacIIfx’s, 19″ monitors, an A1 pen plotter (I miss the way it sang to us), Tops networking software, a laser printer, ClarisCAD1, ArchiCAD4, and Word4 all for a mere £30,000!

Very selfishly, I allocated one of the Macs to myself, but we gradually bought more Macs (IIci’s, Quadras, etc) as prices dropped, and more ClarisCAD licenses. ClarisCAD was a super wee package but by about 1991 development at Claris had stopped. We were on the lookout for a replacement, and our dealer asked if we had considered PowerDraw/WildTools. We tried it out, and it was the perfect replacement. It also addressed the main Claris deficiency, namely, line trimming could only be done one line at a time. The installation was an instant success. Cries of “Have you tried the tool,” were heard around the drawing office. Instant doors and windows, finger technology, multiple line trims, linear repeat, and move points! “Wow wee!”

And all this was fun, too; eyedroppers, syringes, pickleforks, scissors and sound effects! Die-hard manual draftsmen were getting interested! Today all architectural staff use PowerCADD, even one with 35 years of manual drafting experience.

We’ve been under pressure to ditch the Macs for PC’s on a number of occasions, especially when Apple was in the doldrums before Steve Jobs came back, but we’re well established now, and our IT dept is now supporting Macs, mainly due to their success in education. (Here in Scotland Macs are used very extensively in schools though not so much in England) PowerCADD/WildTools’ development over the years has been superb, and the DesignCommunity forum has proved to be an invaluable communication tool, where you know the software writers are listening, and do their best to meet the aspirations of the users.