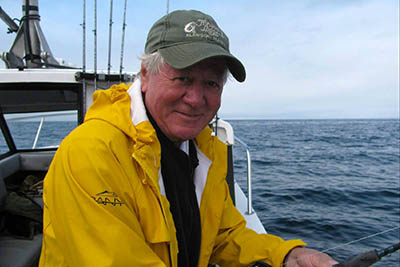 Jack Amos is an graphic designer in Richmond, Virginia, and he’s a close friend and associate of WildTools author Alfred Scott. PowerCADD users will recognize his work. (804) 354-5522 chezjack@jackamos.com www.jackamos.com

Dave Kaberry brought his white and blue Zlin 50L to the United States from England to compete in the World Aerobatic Championships. I was asked to give some thought to upgrading the tired paint scheme. He and his partner wanted me to visually straighten some engineering lines that would in turn make the plane stand out better for the judges to score. All the primary developmental drawings were done in PowerCADD.

Many of the logos I develop begin life as combinations of primary shapes in PowerCADD that get saved out as Illustrator files and are then imported into Adobe Indesign for type additions. Others are screen-captured and converted to Photoshop for additional work.