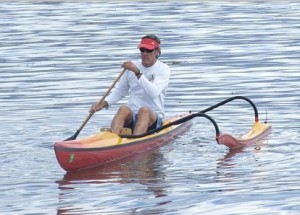 I first encountered Macs while I was an engineer in training, working for a structural engineer in Newport Beach in 1985. At first, we primarily used the Macs for spreadsheets and word processing. Eventually, our draftsman began drawing our typical details on the computer using MacDraft, printing them on a dot matrix printer (before the era of affordable laser printers), pasting these onto a title block vellum, then making a large scale photocopy, from which we could run blueprints. The output looked nice, but you can imagine it was anything but efficient.

I first encountered PowerCADD (well, PowerDraw, actually) back in 1994 or 1995. By then, I was working as an architect for Ron Yeo, FAIA, a small Mac-based architecture firm in Corona del Mar. Our entire production department consisted of me, cranking out hand-drawn construction drawings. Near the end of a producing a set of plans, I would get physically sick as I sat down to draw sheet after sheet of details. I knew there had to be a better way, and I was afraid of being left behind as the industry shifted towards CAD. An architect friend used both PowerDraw and AutoCAD (then available on the Mac). After playing with them for a few minutes, it was obvious that PowerDraw would provide the easiest transition to CAD.

Once we bought PowerDraw, I taught it to myself by drawing details, with absolutely no downtime. I talked to a CAD operator friend to see how he organized his layers and his general CAD philosophy, then it was off to the races! Within a few days, I was on to exterior elevations for a set of construction plans. The learning curve was faster than I could have imagined, and I learned to use the program on billable time. By the second project, I was drawing faster on the computer than by hand, and since then, have left hand drawing in the dust. I then started using PowerCADD’s translation externals to exchange floor plans with our AutoCAD based mechanical, plumbing and electrical consultants. A couple years later, I added WildTools to my repertoire. It added a number of tools that provided me with increased speed and flexibility.

My (not-so) PC friends are amazed at the speed at which I can produce plans. As I tell my clients, my goal is to always take steps towards the goal line (project construction) with minimal wasted time and effort. This saves us both time, saves them money in my fees, and saves me headaches (I am not as patient as everyone thinks I am!). My preliminary designs evolve into architectural construction plans, which transmogrify into structural plans. I have a number of standard structural details, which speed up the construction drawing process, and which I modify to create architectural details. (Unfortunately, with each architectural project being unique, I haven’t found too many standard architectural details — every one of my projects is unique.)

A few years ago, I got married, moved to Santa Barbara, and started my own one-man architectural and structural engineering practice, primarily aimed at residential work and encouraging earth-friendly architectural and structural designs, with projects located all over Southern California. (I jokingly refer to my office as the “worlds smallest A & E firm”.) One of my niches is that I also do structural engineering for straw bale buildings, one of the few of us in California to do so. I use a Macintosh PowerBook computer with PowerCADD and WildTools for drawings, and the usual plethora of other office and bookkeeping related applications. I plot onto translucent bond with a large format HP plotter. On virtually every project, I get comments on how readable and “build-able” my plans are. This is due in large part to my use of PowerCADD and WildTools. My blueprinter has even commented on how nice my plans print, due in part to PowerCADD’s ability to print grayscale lines and use opaque filled objects to mask underlying objects.