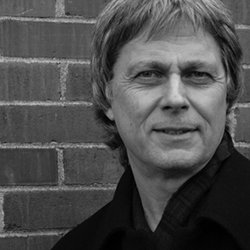 Greg Johnson is a senior instructor at the University of British Columbia, with a joint appointment between the School of Architecture & Landscape Architecture and the Department of Civil Engineering. He is also a principal and maintains a minor involvement in a Vancouver-based architectural firm which undertakes a variety of institutional, residential and commercial projects throughout the province of British Columbia. Greg Johnson, Principle Architecture, 1447 Hornby Street, Vancouver, BC V6Z 1W8, Canada cell: (604) 897 5925 gwjohnson@telus.net

I have been using PowerDraw/CADD since version 2, primarily for architectural construction drawings, although with WildTools, the program’s sophisticated 2D drawing tools and intuitive interface makes it a great tool for presentation drawings, renderings, annotations and the preparation of slides for Keynote presentations as well.

A few thoughts on how I use PowerCADD other than for construction drawings:

• I use SketchUp regularly to create 3D models as part of the design process. Because of the program’s ease of use, often they are only study models as a part of the design workflow. When appropriate, 2D shots or slices of these models can be exported into PowerCADD, cropped and tidied up, and inserted as vignettes into construction drawings, where a 3D view is often easier to understand than traditional orthographic projections. A very fast and efficient process.

• There are times when I want to create a precise axonometric drawing directly within the 2D drawing environment. WildTools 3D makes this process very straightforward, and at any angles you desire. However, initially the tools did not do any of the necessary scaling. I suggested to Alfred the idea of properly scaling the receding objects based on the angles selected, and once I provided him with the math, he incorporated the scaling with the click of a button! Now within the tool you are automatically warned if you don’t have the scaling button selected.

• I have found the PerspectiveTools of WildTools great for adding annotations on photos imported into PowerCADD. Once the photo is imported, it is a matter of locating the vanishing points, then you can add/modify/extend objects easily. I use this technique often with photos taken on construction sites, where I need to overlay drawings, dimensions or comments in order to include within a site report — a much more efficient way than trying to describe it in words.

• I encouraged Alfred to develop a tool for calculating simple shadow casting on a site plan, something often required for zoning submissions. He produced the Sun Shadow Tool, and in his usual way, included much more than I was expecting — a great visual representation of solar position throughout the day. I use it regularly for quick sun studies.

• I always thought that the trial-and-error process for calculating rise and run of stairs could be simplified, and I suggested to Alfred the possibility of developing a tool. He came up with the Stair Tool, which not only allows you to quickly calculate a stair which not only meets any particular Code dimensional requirements you may encounter, but also indicates whether it matches several of the traditional rules-of-thumb for stair comfort.

In my teaching role I often find myself needing to produce slide presentations with images describing rather complex construction assemblies. I prepare the drawing in PowerCADD with each component on a separate layer, save the layers independently as PDFs, which can then be imported into Keynote. The backgrounds are transparent, and with care all the layers should register properly. The ability in Keynote to add transparency and shadows — and have the layers build in order — can assist greatly in understanding the assemblies.

Greg has been closely involved in the development of WildTools for many years.  I never even heard of axonometric projections until Greg suggested the addition of the scaling option to WildTools 3D — indeed most drafting texts talk about it only in the theoretical sense because it was completely impractical to do the calculations with manual drafting.  What’s most impressive is that Greg had worked out the math, and this is what makes the Scale option work in WildTools 3D.

Then there was the Stair tool, and along the way there have been many other parts of WildTools that Greg has helped to create. When I look at WildTools, I’m in awe of what it has become, and I really don’t understand how it came to pass that I had any part of it.  It’s something that has been created by many talented people, and it’s just been my privilege to be in the middle of it all.  The lesson for me is that you can never stop learning from other people.