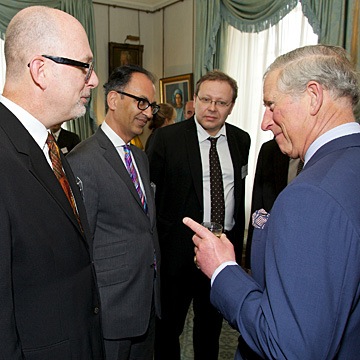 My first exposure to the Mac was at a computer show in Huntsville in late 1983, I believe — it was before they were officially released. It was love at first sight: the graphic an operational integrity were things I had wished for. I still have my original Mac somewhere in the attic.

I worked on Macs at the office since 1986, and I have been a Mac-only office since starting my own company in 1991. We did everything — accounting, graphics, estimating, correspondence, you name it, on the computer — except for architectural drawing. I resisted for years going to CAD based on the belief that CAD drawings could never look as good as my hand-drawings. I had worked on MicroStation at the beginning (in 1984-1985). I was quite familiar with the work of AutoCAD and DataCAD drafters, and it was discouraging at best. I explored MicroStation Mac, only to be turned off by the non-Macness of it, including those horrible stroke fonts (sure, you could do PostScript or TrueType fonts, if you wanted to jump through a dozen hoops).

Finally, however, in late 1994, my then-partner insisted that “We’ve gotta go to CAD. The clients are demanding it, and if we don’t, we’re gonna lose jobs.” After a couple months of discussions, I finally started searching in earnest. I compiled a list of about 50 criteria I was looking for, from deal-killers to wish-list items. Some were as simple as “quick learning curve” and “uses PostScript fonts” to stuff like “must import and export Adobe Illustrator files.” I got the Macintosh Product Directory & faxed a copy of my list to every Mac CAD manufacturer out there, complete with a plea for help. It was no contest. Most of them, including MiniCAD (my original front-runner simply because of market share) could satisfy at best half of the criteria. Many never even bothered to respond. Not only did Engineered Software fax my list back with a response (yes on 3/4 of the items), but they even called. Like I said, it was no contest.

Since then, they’ve satisfied almost all of the remaining 1/4 of the List Items, which is pretty amazing, considering the responsiveness of most software companies. We are now totally PowerCADD-driven. I haven’t drawn a line by hand since December 1994, and no one else in my office has since September 1995. Our three professionals can produce more on PowerCADD and WildTools than a 10-man firm could do by hand. And that productivity continues to improve, not only because of the fact that Engineered Software listens, but also because of an amazing tool-maker named Alfred Scott. Alfred is the author of WildTools. I have called Alfred on numerous occasions with ideas for a tool, only to see that tool fully constructed a few hours, days, or sometimes weeks later.

Try it for yourself. Many times, while learning PowerCADD, I’d think to myself “now, this oughta work this way,” and I’d try it, and sure enough, it would. Everyone talks intuitive; PowerCADD and WildTools does it. They’re tools that’ll out-Mac the Mac.