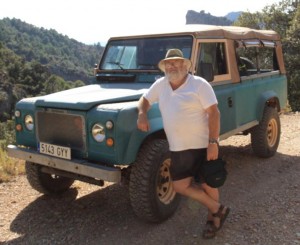 Malcolm Woodruff is a civil engineer with offices in Bristol in the UK but spends most of the time in Teruel, Spain. He has offered many suggestions that have been included in WildTools and has helped with getting European steel shape dimensions into Nuts & Bolts. mail@malcolmwoodruff.co.uk Website: www.malcolmwoodruff.co.uk.

In 1988 I caught a steel fixer holding a reinforcement drawing up to the sun and to look through the back. It was a drawing for a house foundation that was similar but handed to the house next door.

Whilst this was common at the time to save drawing time, I decided that this was a recipe for a disaster and decided to get a CAD package. Having bought the first colour Macintosh to arrive in the UK, I looked for a program. AutoCAD was promised although not available for a few months, but I found PowerDraw at a show and bought it as a stop-gap until AutoCAD became available.

The first day was difficult but by the third I was producing drawings at one-third of the time I had by hand and when AutoCAD did become available there was no way that I could afford the drop in productivity that going to AutoCAD would have meant.

I have stuck with PowerDraw and then PowerCADD ever since. I like it because it is the closest program I know to drawing with a pencil, or pen and ink, and water colour on a drawing board. It has the flexibility that those tools have. You are not confined to drawing buildings or anything in particular. You are just free to draw. It is a program with which to create.

Drawings are for communication. I tend to use colours, transparencies and gradients to give life to many of my drawings. This makes them easier to understand than just a mass of lines. Most of today’s computer-drawn drawings are lifeless and more difficult to understand than those produced by hand before computers. PowerCADD and WildTools make it possible to produce drawings to a similar standard as those that were hand-drawn but at a speed to equal, or better, any other CAD program on the market.

I find it difficult to explain where PowerCADD or WildTools have been particularly helpful. I have been using them for nearly 26 years now, and they have become second nature. I have lost track of what AutoCAD and other programs do, and what their interfaces are now like, so I cannot really compare them to PowerCADD and WildTools.

I do however see the drawings that have been produced with other programs. They are generally lifeless and flat, even when done by architects who I know can turn out superb drawings by hand. When a drawing is flat, composed only of black lines, often all of the same thickness and with little in the way of fills, hatching or tonal variation, it becomes difficult to read. The use of a ruling pen, that allows line thickness to be varied on the fly, and water-colour on old pen-and-ink drawings was done for a purpose, not just to look pretty. With PowerCADD and WildTools it is simple to reproduce the look of these drawings. Hey, you can even draw with wriggly lines!

They are also feature-rich. If I need a tool to carry out a particular task, say draw a bolt in 3D, a perspective view or sketch out the wheel positions of an articulated lorry going around a bend, it is there. I do not have to buy an architectural extension or a civil engineering add-on. If a tool I would like is missing then often an email to Alfred will result in it being included in the next WildTools upgrade.

I like my software to work in the way I do, and I do not want to conform to the way the software demands. I like it to be versatile and complete. PowerCADD and WildTools together do it for me.