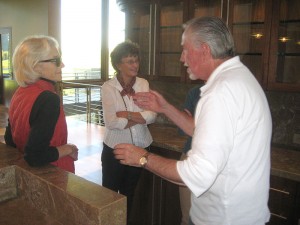 For many years my drafting work was focused on precision electromechanical machine tools and aircraft parts, but in recent years it’s much simpler — mostly depictions of architectural elements in which I’ve always been interested. I use PowerCADD with WildTools because it’s the most powerful and intuitive drafting software system I’ve ever encountered. Drawing is genuinely fun, and I never encounter a depiction I can’t produce quickly and easily.

Frank Christensen founded Tempress Industries in Northern California in 1960 while finishing his last year at Stanford University. He learned of the needs of the then infant semiconductor industry and set up shop with some special-purpose machine tools. Among the first people he called on were Robert Noyce and Andy Grove, then obscure engineers at Fairchild Semiconductor. (Noyce and Grove were later the founders of Intel). Fairchild was the first company to find a way to produce semiconductor devices in volume, and they needed specialized production tools and machinery to produce the ultraminiature microelectronic devices. They gave Frank an opportunity, and over the next dozen years his company grew at a phenomenal pace to hundreds of employees.

At age 34, Frank sold his company to an electronics conglomerate, purchased a ranch in Hollister, California, built a private airport, and “retired”; but he soon got the itch to design and build again, and he started Christen Industries to manufacture aerobatic aircraft accessory products (his inverted oil system for Lycoming aircraft engines has been the industry standard for decades). Frank is best known in the aviation community for the creation of the Christen Eagle II aerobatic kitplane, the first totally complete high quality aircraft kit to be marketed. The kit construction manuals are legendary — in all there are over 30 profusely illustrated 300-page instruction books that take you step-by-step through the construction of the aircraft. Christen Industries later acquired and operated the Pitts Special factory in Afton, Wyoming. Under Frank’s ownership, the company developed the FAA certificated Christen Husky aircraft.

Frank subsequently sold his aircraft manufacturing company, but he doesn’t consider himself retired. Rather, he describes himself as “between troubles.” Because of his experience with drafting and producing the Christen Eagle II manuals, he has long been interested in computer-aided-drafting. He purchased an IBM Fast-Draft system for his aircraft design work in the ’70s, but he eventually settled on the Macintosh and PowerDraw which he introduced to his crazy friend Alfred Scott. Since then, he and Alfred have been the principal unindicted co-conspirators in the creation of WildTools, often conferring by telephone on Sunday mornings on some new feature for WildTools. (Frank and Alfred both categorically deny being obsessive-compulsives.)