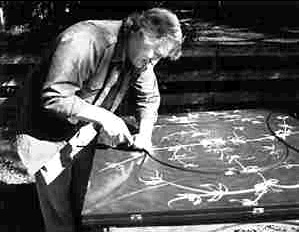 When I first started building furniture I worked alone and designed on the fly, as the piece was being constructed, from the image in my mind. As the business expanded, and I began to hire other craftsman to make my designs, we worked mostly from hand-drawn sketches and supervision in the shop. As marketing took me out of the shop more and more, I hired a draftsman to take my furniture concepts from idea to shop drawings. While this worked for the most part, I found that some of his design interpretations were out of sync with mine, resulting in costly redrawing.

When the Mac Plus came out I decided to bite and try drawing on the computer. First struggling with MacDraw and then with Claris CAD. About the time that Claris stopped supporting their CAD program I heard about Engineered Software’s PowerDraw. Two selling points enticed me. The Claris CAD translator which would give me access to all my previous drawings and the fact that PowerDraw (now PowerCADD) permitted me to assign the key commands that I had become accustomed to in the abandoned program.

PowerCADD’s open architecture proved to be the biggest bonus because it permitted Alfred Scott to do his thing. The original WildTools was a major improvement but the changes in WildTools 2.0 blew me away. Unlike most companies, where the upgrades are published with minimum changes simply to boost cash flow, WildTools took me to a new level. I use the program daily to complete fast and accurate shop drawings but most important I then use the Squiggle tool on a copy to make realistic “sketches” for presentation to my customers.